Are you making promises you can’t keep? Chances are you are and now you can’t hide . There is so much pressure to deliver more than the competitor next door that it forces many small businesses to over commit and under deliver. When your service has become a commodity it is a pressure that is constant.

However customers are now seeking authenticity, transparency and collaboration. We want to engage with brands we identify with and trust. To do this we need to be sure that you are going to deliver what you say and keep your promises!  Phoniness can now push consumers away because it is not what it says it is.

Consider clothing retailer Gap Inc. Its advertisements over the past decade, featuring line dancers and celebrities, have had several effects. First, they put off many current customers who saw images portraying Gap as different from how these individuals saw themselves. Gap no longer conformed to (and thereby confirmed) their own self-images. With each successive ad, the Wall Street Journal observed, such consumers grew “tired of [the] trendiness.” Second, in-store displays merely paid lip service to the advertisements — actual interactions with sales personnel fell far short of the energy and enthusiasm displayed in the ads.All Gap stores — thousands of them — look exactly alike.Gap’s advertising says “Unique,” but the in-store experience falls far short of what it says it is.

Or think of any airline, hotel, or even hospital; if you could only check into the ads, you’d have a great experience. When you check into the actual place, however, it so often falls short of what the ads represented. When it comes to the Is What It Says It Is standard of authenticity, the easiest way to be perceived as phony is to advertise things you are not.

The Dove real beauty campaign was such a success because it focused on real promises and achievable success.Your promises don’t have to be extra ordinary but they have to be real.A promise only works as long as it hasn’t been broken.  Don’t make promises you can’t keep because someone who has put their faith in you only to be disappointed won’t make the same mistake twice, and they’ll warn all their friends away from you as well using sites like womo.com.au, trip advisor, product review and more.

But the converse is also true.  When you are able to over-deliver on your promise and give people more than they asked for they will eagerly become your biggest fans. 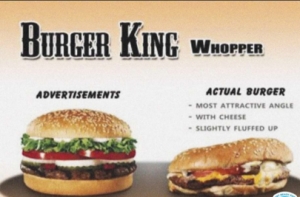 romise. We know that this has become more critical today than ever before, which is why we have built Strategic Service Design to align your service to the promises it makes.

Worst still is to lie because there is no where to hide. Make good on your promises or you will be out of business.

This site uses Akismet to reduce spam. Learn how your comment data is processed.

My marketing tips in 1 minute